And that seemed to me quite a lot - more than i've ever done in one summer before.
This year, 2010 i think may be even better (worse!)
And I'm looking forward to it already!

Posted by Talita Twoshoes at Monday, January 18, 2010 No comments:

I've been meaning to post these photos for a while, my friend in Nepal sent them to me. All the time i was in Kathmandu i kept trying to take a photo of this big advertising board at a crossroads there saying "China Forever" with a big picture of the Potala palace. But Kathmandu traffic doesn't really let you stop for photos. Kindly my friend Sunil did it for me! Thank you!

Why did i want a photo of these hoardings? Well, its just a reminder of the China tourism machine, that is brazenly promoting the Potala and Tibet as a part of the great Chinese empirical history. Its as much bollocks as the advert above it! If not more!

Still wanna go back though!
Posted by Talita Twoshoes at Monday, January 18, 2010 No comments:

I like making New Year's resolutions. I like having a plan.
I tried to have a plan last year in 2009. Not only did i have 7 New years resolutions, but i also had a London paper horoscope for 2009 which i thought was a good plan to try and stick to. 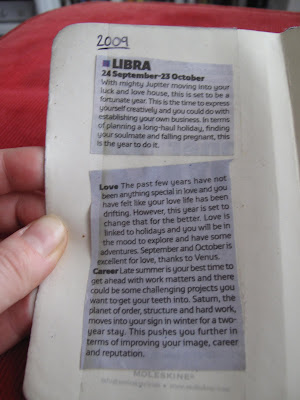 But i didn't set up my own business, but i did plan some long-haul holidays...

I didn't find my soulmate, and i didn't fall pregnant...

But, hell it was a good plan right? Haha!

So how did i do with my own resolutions that weren't according to the stars?

I did visit Tibet and Buenos Aires, but i didn't visit Istanbul.

I didn't do much jogging. Its crap.

I did do my hip exercises. Sometimes.

I never passed my skating assessments.

I didn't email a radio demo every fortnight. (But i really should have done)

And i still don't have a paid radio show...

BUT you know, even if you don't achieve all of your plans, its good to have some goals, and a list.

So now i have to think about 2010. I'm not relying on the London paper horoscope this year. Instead i've bought a 2010 horoscope guide for £5.99. Surely the extra £5.99 will mean that its all BOUND to come true right?

But now after having been to Tibet, i need to work out where i want to go this year, as after having done something you've been waiting to do for so long its difficult to know where to go next!

At least i know i still have to get to Istanbul!

I've been meaning to write something about my name for a long time now, as i'm always getting asked about it, and its a subject that's obviously gonna be of interest to me.
So, i was named from a book of the stars my Dad had for navigation, that he'd picked up in Finland - or it was a Finnish book of stars - one or the other.
My brother Rigel, and sister Capella are also named after stars.
My Dad always told me my name meant "Third leap of the little gazelle" but actually it is the third leap in a row of stars that are called the "Three leaps of the little gazelle" 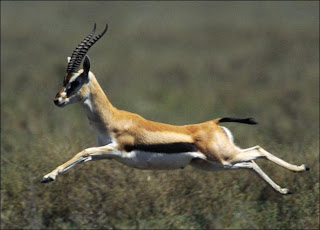 My Dad sent this to me last year when he found it online:
"In addition to the famous seven stars of Ursa Major there are three pairs of stars that mark the feet of the bear. The Arabs imagined these as forming the tracks of a leaping gazelle. The pair Nu and Xi Ursae Majoris are called Alula Borealis and Alula Australis. The word Alula comes from an Arabic phrase meaning ‘first leap’; the distinctions ‘northern’ (Borealis) and ‘southern’ (Australis) are added in Latin. The second leap is represented by Lambda and Mu Ursae Majoris, known as Tania Borealis and Tania Australis, while the third leap is represented by Iota and Kappa Ursae Majoris, although Iota alone bears the name Talitha, from the Arabic meaning ‘third’." 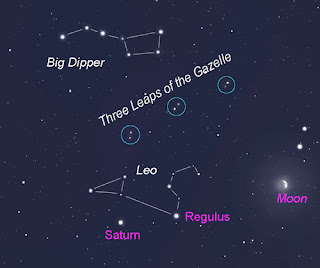 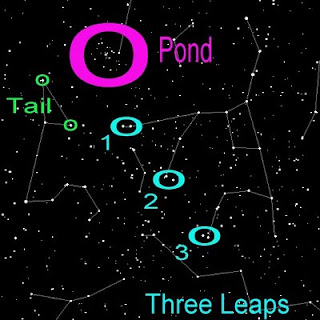 I realised a couple of years ago that 'Mark the Evangelist' wrote in the Gospel of Mark:
"And Jesus took the damsel by the hand and said to her "Talitha Kumi" which means "Little Girl I say unto thee arise."
So in the story of Jesus' miracles he brought a girl back from the dead by saying "Talitha Kumi" (although she may have just been sleeping... ;-)
Little girl, get up! 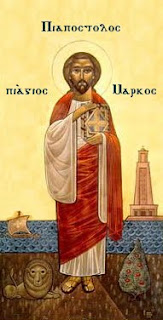 Pretty looking eh? I don't speak it, its a "dead language". But i find it fascinating - and would really like to see what Talita (Talitha - they're the same basically) would look like written down. 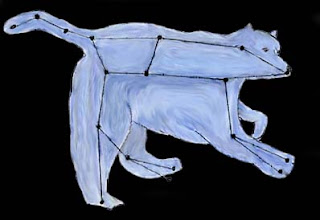 So...bears, gazelles, Aramaic, Arabic, the number 3, dead girls
and a star in the heel of the great bear, Ursa Major.


I assume that "Talita" as opposed to "Talitha" is the Finnish or Nordic version, but that i don't know.


So this is what i  do know about my name and where it comes from.


And no, my parents weren't hippies.


And any other information always appreciated!
Posted by Talita Twoshoes at Monday, January 18, 2010 No comments:

Can't stop, won't stop - no rest for the Wicked! 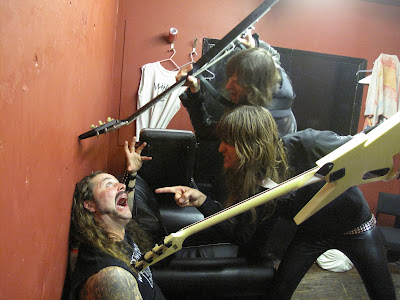 2 Days after getting home from the Himalayas my dear friend Myra arrived and we whizzed off with Lucy to see Cauldron with Wolf. I missed the whole Wolf/Cauldron tour apart from the very last date which happened to be in.... Dudley. 2 very different worlds, Buddhist Kingdoms and Heavy metal, but i love them both! 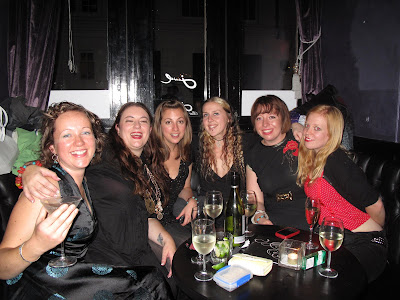 Weekend after the Himalayas! Gatecrashing my sister's 40th birthday with some of my best buddies! 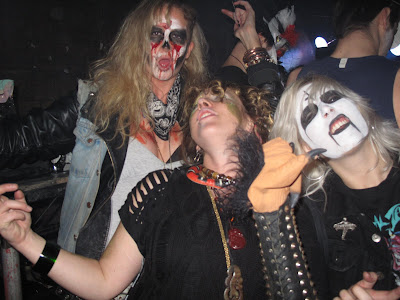 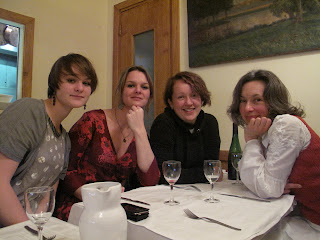 Paris where i visited my sister and her family and my dear Cecile! 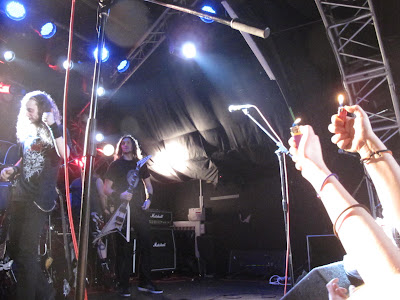 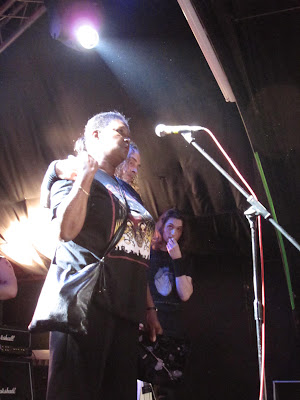 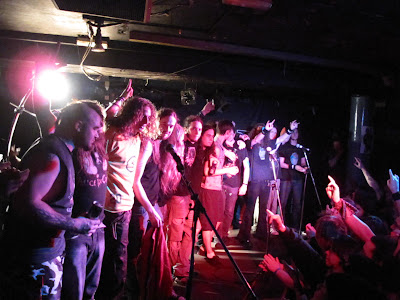 London show with all the bands that played - Seregon, Mutant, Gama Bomb and the covers team! 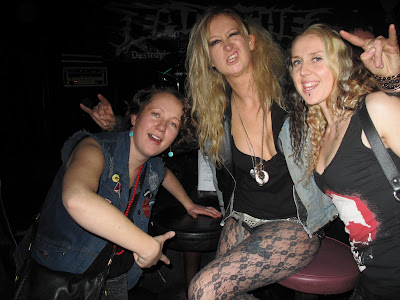 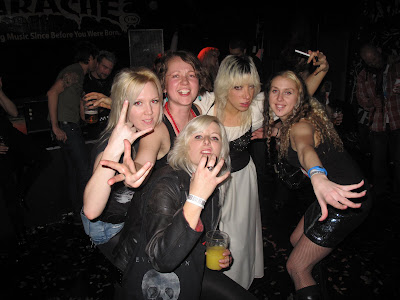 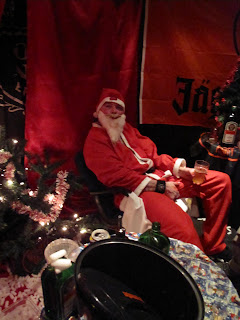 Seamus - the best dyslexic Santa ever!

Thanks Myra for helping me out with the Mike shows, and Lucy for the party and all of my friends for being so ace!! x

Posted by Talita Twoshoes at Friday, January 01, 2010 No comments: