The journey of my career path so far...

(my thoughts on how to change career... many times, and whether it matters)

I went to a talk the other week at The School of Life by John Gray (Straw Dogs) and Alain de Botton (The School of Life). In it Alain asked John what he thought about the two great myths of our time - The myth of career, and the myth of love. John answered that the career was dead, but both "Work & Love are not entirely dissimilar - both show we are of value to other humans".

When i look back on my myth of a career so far, it doesn't make sense in any standard bureaucracy. I can imagine companies receiving my CV and thinking:
1) Who the hell are Earache Records?
2) What does this girl want from her career?
3) How has she worked at all these festivals and done all this stuff, she must be lying?
4) She clearly doesn't know what she wants to have tried all these different things.
5) This is not the standard, reliable background / formation I would like our employee to have, lets go with someone with more consistent experience. 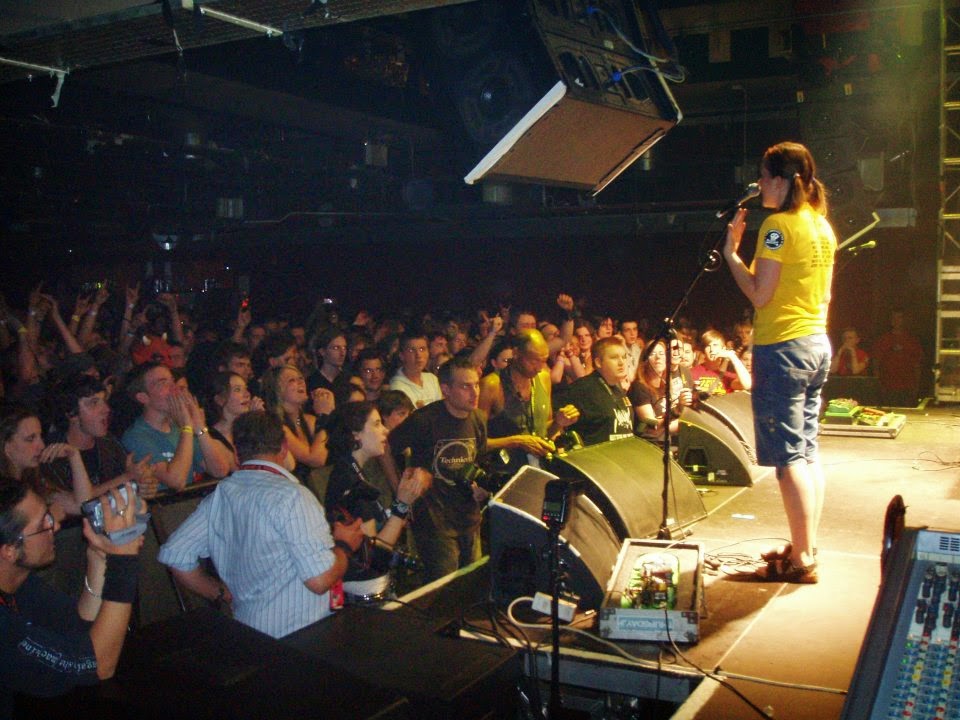 (Here's a photo of me giving a weird motivational speech at Uxfest,
Islington Academy (now o2) in 2006)

(Not in any particular order) I've worked as a youth worker, i ran projects at a children's charity, I've presented rock radio, i have run a french hip hop club, a rock festival, i have a degree in french and European studies, i have managed bands, i have a degree in theatre from a french university, i have presented on Japanese TV, i have been a TV researcher, I've worked in a theatre box office, I managed publicity for a record label, I've worked on festivals in all sorts of places, I've been an artist liaison, I've been a backstage manager, I've done crowd management, i worked at the Olympics, i made a film about graffiti artists that was never seen, i ran social media campaigns, i went back to school again, i discovered a love of painting, i went freelance...

A lot of these things seem similar to me. They have different job titles, but to me, as i was the same person when i was doing all these things, the skills have all been mine and I look at it as just a normal progression.
I don't want to make this blog about CV writing because honestly there is nothing as galling as writing and rewriting your bloody CV, let alone reading a blog about it. I still find writing a CV the most mind numbing thing on the planet apart from maybe listening to party political broadcasts, BUT i have learnt a few things about having a myth of a career that goes across 'different industries' -

1. How people like CVs to look is really personal to them. You cannot anticipate the way people like CVs laid out.
2. People do check LinkedIn (even though it is super annoying)
3. Seeking help is important - i was so lucky with two people in particular (Thank you Ewa and Jon) helping me out over the years trying to gather my thoughts, find the right language and to...
4. Break your work experience down into skills
- The skills will really tell you where you're at, where the gaps are and where you can go next...

Anyway, enough about CVs, what i wanted to get to is a lot of people are still surprised that i left Rival Sons last summer (Isle of Wight Festival 2014) and then 2 months later started working for the Zoological Society of London. It seems like a big change... but is it really? If you look at the skill set to me there is a lot of overlap... because i am the same person!

You may already know how much i love Rival Sons. Without overstating it, these guys have supported me, been grateful for my work, been my true friends and generally done a lot more than most bands would for their publicist. So you can imagine that it was a very difficult decision to say goodbye to working with them after being there from day dot.
John Gray was right, when he said "Work & Love are not entirely dissimilar - both show we are of value to other humans" - I have always felt immensely valued by Rival Sons, but my myth of a career path needed to go a different route. 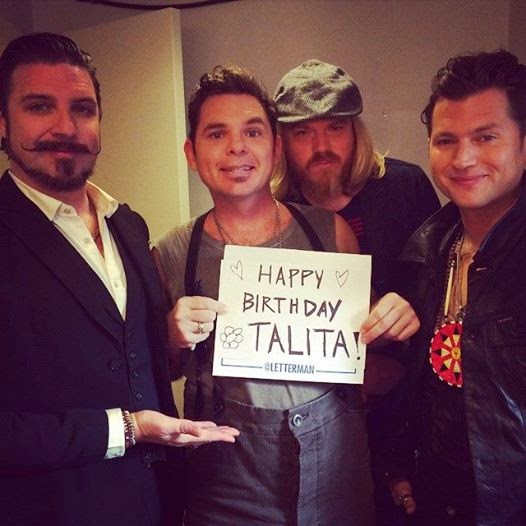 Here are Rival Sons on the set of Letterman last year, wishing me Happy Birthday. What a band.

My heart has never really been with music publicity, my heart was with the Rival Sons, with the music, with the creativity. Truth be told at times i disliked doing music publicity. I fell into it and it was never really a career choice i made. After 6.5 years at Earache and 2 years freelance, the other stuff i did over and above publicity, was more important to me than being between rock (n'roll) and a hard place in the no-win game that is music PR. That's not to say i didn't have a lot of fun, and i am very grateful for many of the opportunities i got, but for a long time, for myself, i needed something else.

It seems to me that there are few places to progress to from the role of a female music PR, and i can't understand why anyone would want to be a music PR forever. Even if you are working with the best bands, your existence is dependent on their choices as if you are living vicariously through them. Maybe you switch sides and become a journalist, maybe you tour, maybe you do film PR or similar. None of these options appealed to me.

I needed time to find my own creativity, and to get to what i really wanted and needed. After i left Earache Records in 2012 i began to realise how much i love all forms of art. I was lucky that although my strange myth of a career path was too diverse for many HR managers, it did allow me a spectrum of experience in the Arts, enough that through my skill set i could apply for the job i now have a the Zoological Society of London running their Arts & Culture programme.

What i want to say to people with a real range of talents who have worked in lots of different creative sectors, is - don't think you have to take the direct route in your chosen job. Having multiple strings to your bow actually affords you a strange kind of freedom outside the bounds of the 'myth' of the career path, and a perspective that is so useful to a future employer - and if a career itself turns out to be a myth in future years, as predicted by John Gray and Alan De Botton, then you will be in a much stronger position.

Rely on yourself and your hard-won skills, because whatever job you're in, you're still the same person. After all, your job isn't your identity.